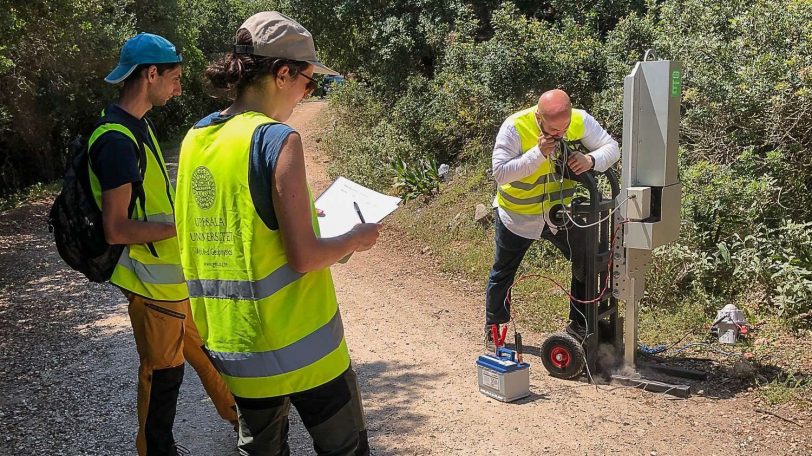 We have been able to carry out a huge amount of important fieldwork in 2022 due to the generous support of our donors. If you donated, thank you. If this report and the information you can find on this website prompts you to support the Odysseus Unbound project, click here for details of how you can help.

The 2022 fieldwork was planned to be closely focussed on making a final determination of the fundamental “island hypothesis”: that Paliki was a separate island in the Late Bronze Age, the time of Odysseus.

Seismic surveys of the Thinia valley

In May, we welcomed teams from Uppsala University in Sweden and the Politecnico di Torino in Italy, who joined our long-time collaborator, Professor George Apostolopoulos of the National Technical University of Athens, to carry out seismic and gravity surveys across the Thinia valley.

The aim was to image deep cross-sections of the valley right down to sea level and below, to look for evidence of the former marine channel that we propose existed along the valley in the Late Bronze Age.

No signs of the channel remain on the surface. Any evidence for it is buried within the complex geology of the valley subsurface.

Previous ERT surveys and boreholes have given us a good understanding of the sub-surface structure down to some 165 metres but the seismic data should give us further clues about the geology of the valley to a depth of 300m or more, well below today’s sea level.

It may even able to identify remnants of the channel sides.

Two different seismic techniques were used. Active seismic data collection generates an image of the subsurface in great detail but to a limited depth due to the small seismic sources used. Passive seismic “sees” much deeper, but in less detail. 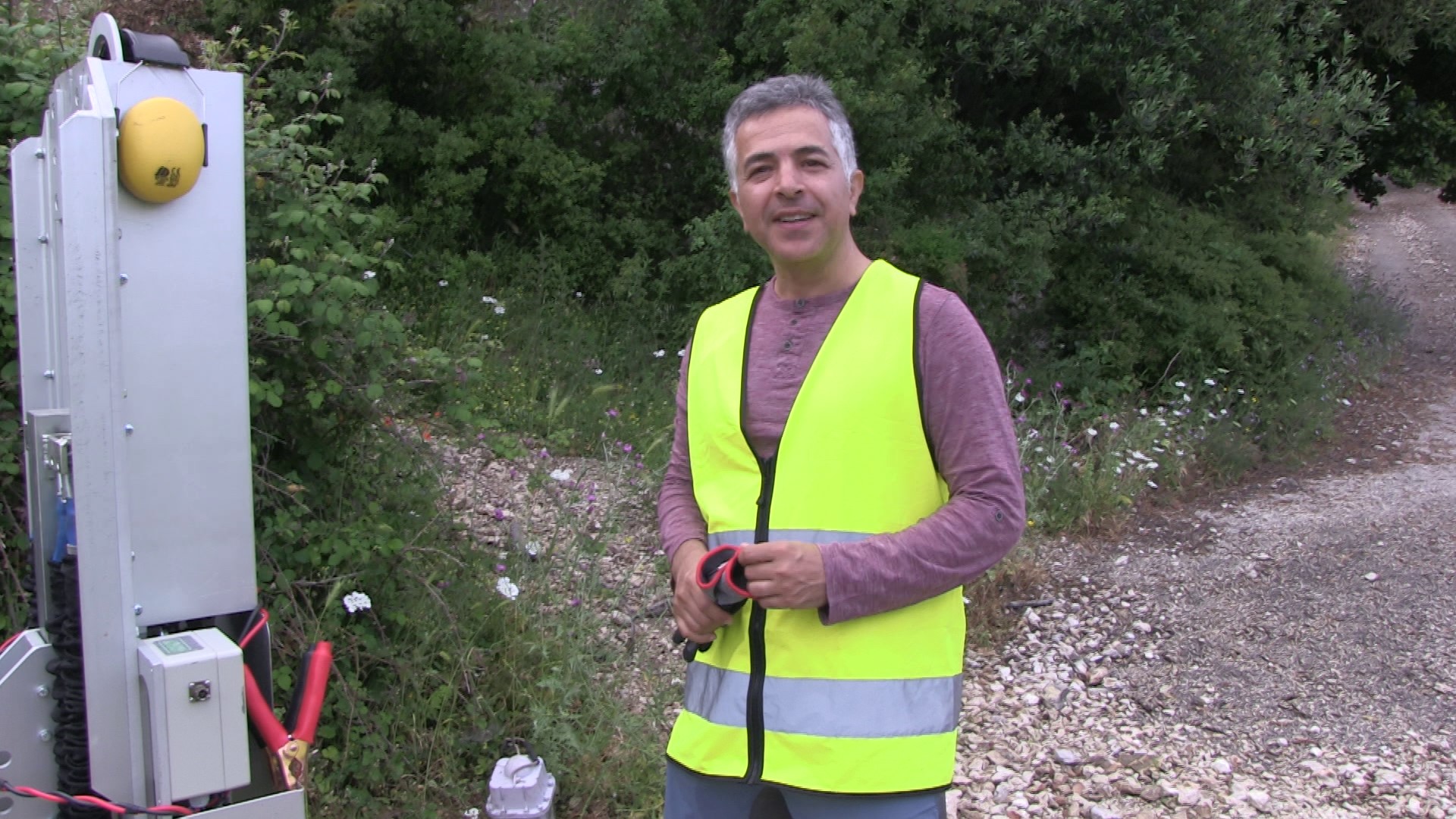 Combining the data from both techniques with the lithological data from several boreholes drilled by FUGRO in the Thinia valley over ten years ago will give us our best possible understanding of the valley structure.

Dr Jean-Luc Schwenninger came to Kefalonia in October to collect samples for OSL analysis in his Luminescence Dating laboratory at Oxford University to help us determine when the landslip that closed the channel happened.

Optically Stimulated Luminescence (OSL) reveals the date when a sediment sample was buried by discovering when it was last exposed to sunlight.

Two trenches were dug near what we call the “wooded triangle”, a tree-covered area at the southern end of the Thinia valley, where landslip material has splashed over the bedrock on the western side of the valley and buried ancient walls.

The trenches lie on the western end of the southern seismic profile (pink line in Google Earth image, above) which ties the dates obtained to the deposition and tectonic movement of the wider area.

Jean-Luc collected samples from within the trenches at different depths which should give us the date for when the walls were buried.

Also in October, Professor Maria Triantaphyllou, a micro-palaeontologist from the National and Kapodistrian University of Athens, surveyed and took surface samples from the southern exit of the Thinia valley.

Here, on the edge of the massive landslip that we suggest closed the marine channel, though still uplifted by some 30 or 40 metres, the channel is likely to have been much less damaged.

While any obvious surface evidence for the channel has been eroded, today’s surface sediments may still have originated from the channel floor. If they did, they will contain marine micro-fossils deposited when the sediments lay at the bottom of the channel.

Maria will examine her samples under an electron microscope in her lab in Athens to identify any micro-fossils.

Finding such micro-fossils at that height above sea level would be significant evidence that a marine channel once existed.

This year we continued our close collaboration with the Ephorate of Antiquities of Kefalonia, the Greek government archaeologists on the island.

Excavations at a known Mycenaean site on Paliki produced further tantalising clues that this was a significant area of human occupation in the Late Bronze Age.

A huge amount of data has been collected in 2022 and it will take time to analyse and understand it all properly.

Our grateful thanks go to all the scientists who have generously given their time and expertise.

Sign up to stay updated with all our latest news, results and events.

We will always treat your personal information responsibly.

The Odysseus Unbound Foundation is committed to ensuring that your privacy is protected. Should we ask you to provide certain information by which you can be identified when using this website, then you can be assured that it will only be used in accordance with this privacy statement.

If you choose to share it with us we may collect the following information:

What we do with the information we gather

The Odysseus Unbound Foundation processes your personal data as a Controller as defined in the EU General Data Protection Regulation (GDPR).

We require this information to understand your needs and provide you with a better service, and in particular for the following reasons:

Other countries may not have data protection laws as comprehensive or protective as those of your country of residence. However, we shall only transfer your information to organisations that have agreed to process data in compliance with the EU GDPR.

At all times, our collection, storage and use of your personal data will continue to be governed by this Privacy Policy.

We are committed to ensuring that your information is secure. In order to prevent unauthorised access or disclosure, we have put in place suitable physical, electronic and managerial procedures to safeguard and secure the information we collect online.

For example, we never store your credit card details on our servers and all donation transactions are secured by SSL. Stripe, PayPal and GoCardless support the European Union’s new Strong Customer Authentication (SCA) requirements (effective from 14 September 2021).

A cookie is a small file which asks permission to be placed on your computer’s hard drive. Once you agree, the file is added.

In general, cookies are used for purposes such as to retain user preferences or to help analyse web traffic including by providing anonymised tracking data to third party applications like Google Analytics. This helps us to understand how our web pages are used and to improve our website in order to tailor it to users’ needs. We only use this information for statistical analysis purposes and then the data is removed from the system.

Most web browsers automatically accept cookies, but you can usually modify your browser setting to decline cookies if you prefer. This may prevent you from taking full advantage of the website.

Links to other websites

However, once you have used these links to leave our site, you should note that we do not have any control over that other website. Therefore, we cannot be responsible for the protection and privacy of any information which you provide whilst visiting such sites and such sites are not governed by this privacy statement.

If you believe that any information we are holding on you is incorrect or incomplete, please write to or email us as soon as possible, at the above address. We will promptly correct any information found to be incorrect.